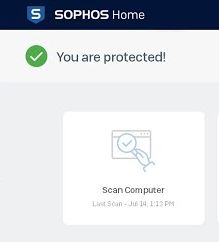 Quality antivirus and web filter for PC and Mac
Sophos Home is a free program designed to protect every PC and Mac in your personal cyberspace or in your family from threats such as malware, viruses, ransomware, malware, and compromised or inappropriate websites.

Sophos Home uses the universally recognized and accepted technology implemented by security professionals to protect the information systems of various organizations. The icing on the cake with Sophos Home Antivirus is that users can customize their security settings for each computer from any of the popular browsers, such as Chrome, Edge, Firefox, and Safari.

Sophos Home Antivirus is for non-commercial and home use for up to 10 computers per account. Not a home user? Sophos has a full range of business and enterprise solutions that can be tried for free for your organization at Sophos.com.

Sophos Antivirus is compatible with Mac OS X 10.8 and later and Windows 7 and later. It has an extremely simple and user-friendly security management process from a web dashboard. The control panel includes an in-depth troubleshooting help guide and FAQs to help users navigate the program.

Interacting with and using Sophos Antivirus

The main Sophos Antivirus dashboard consolidates everything a user needs to know about their security settings. Users can quickly see security status updates and alerts related to each computer. They can also add additional PCs for protection.

With one click of the mouse, users can select each machine individually for additional control functions. Users can request a scan or remove the device. Each page of the device allows users to turn off/on the three different comprehensive security settings, namely Automatic Virus Protection, Potentially Unwanted Application Detection, and Web Protection. It also includes security status updates, alerts, web filtering options, and an exceptional feature.

Introducing a new standard in protection

As stated above, Sophos uses the same award-winning enterprise technologies in Sophos Home. It has won praise from multiple independent testing labs.

If you are looking for an antivirus program that is both free and effective, then Sophos Home is not only able to meet, but also surpass the standards of its competitors. Its simplicity, reliability, and flexibility are more than capable of meeting the needs of the modern online user.